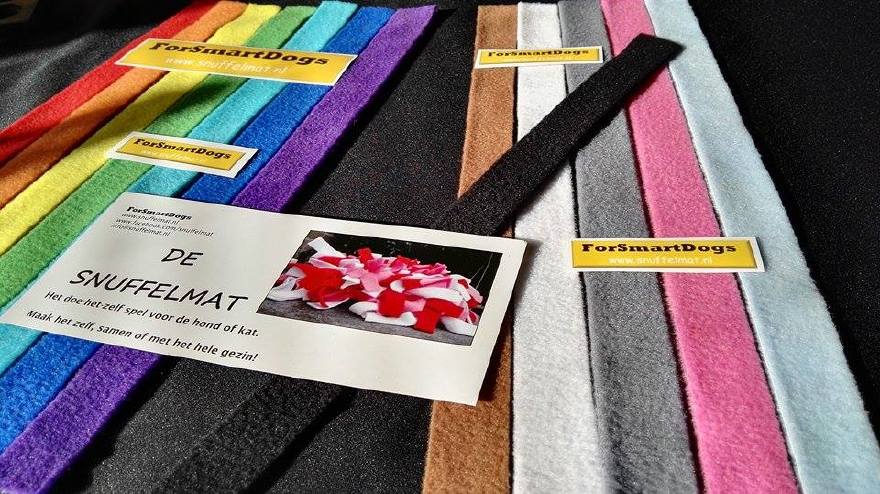 The snuffelmat was invented in the Netherlands by enthusiastic dog owners who like to put their four-legged friend some thinking to do (brainwork). With the snuffelmat the dog sniffs to find the dry food/treats, which are hidden between the fleece strips.

You can use the snuffelmat to give the dog food in a different way or give it as a game. The best time of day for the dog is the time the dog gets his/her meal. For many dogs, this is once a day, for others maybe twice a day.

For the dog this highlight of the day usually takes two minutes of enjoyable time but often less than 2 minutes! In addition, the dog misses the satisfied feeling of the search and hunt for food.

The snuffelmat extends the duration of eating a meal up to 15 minutes and gives the dog a sense of satisfaction because they have to search for their dry food/treats.

The snuffelmat  makes the dog tired because of the duration of the search and the use of the brains while snooping. An additional advantage of snuffelmat is that many dogs who struggle to eat out of the container will eat their meal from the snuffelmat! Not only do dogs love the snuffelmat, cats also love to search between the strips and find their dry food. In the snuffelmat you can hide a whole meal of dry food up to 400 grams. 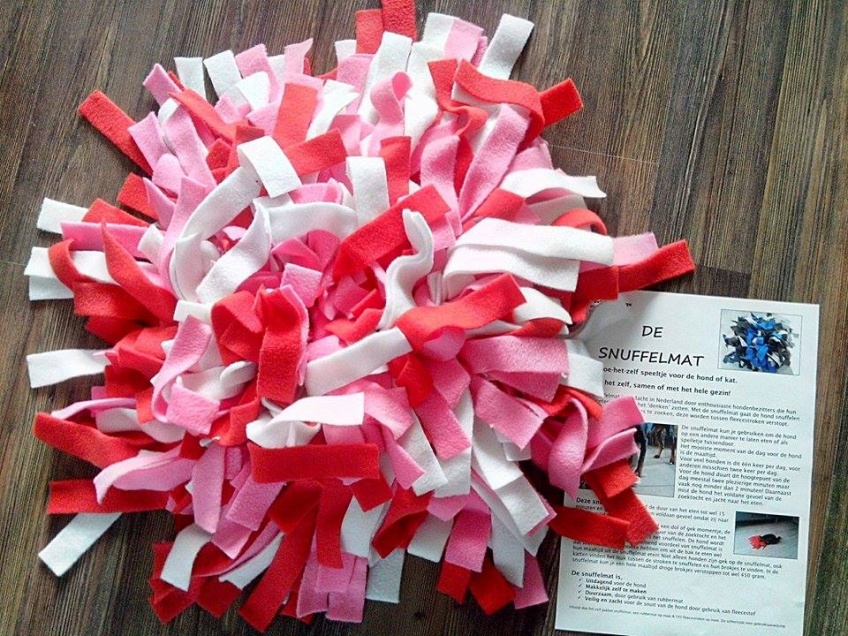 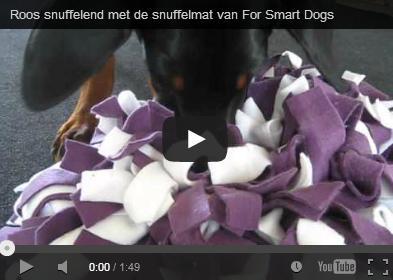 The snuffelmat is available in various color combinations. The fleece strips are made ​​to measure and can be tied with a simple knot in the rubber mat.

Below is a short instructional video. 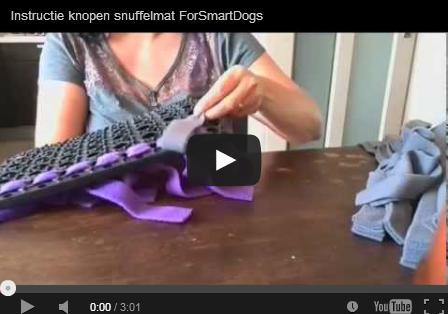 To ensure the dog uses the snuffelmat to sniff instead of picking up, shaking, digging and pulling the strips, the way to offer the snuffelmat is important.

The first time you put some threats ON the fleece strips and 2 or 3 pieces between the upper strips. When the dog has found them you put the snuffelmat away, out of sight.

The game is based on the first sense of the dog: The nose. That's why they go to the first reward (finding a threat with the nose) immediately snooping to reward themselves. More Self Rewarding Behavior ensures the dogs does not destroy the snuffelmat!

You can choose a 3 colourcombination out of 12 colours! 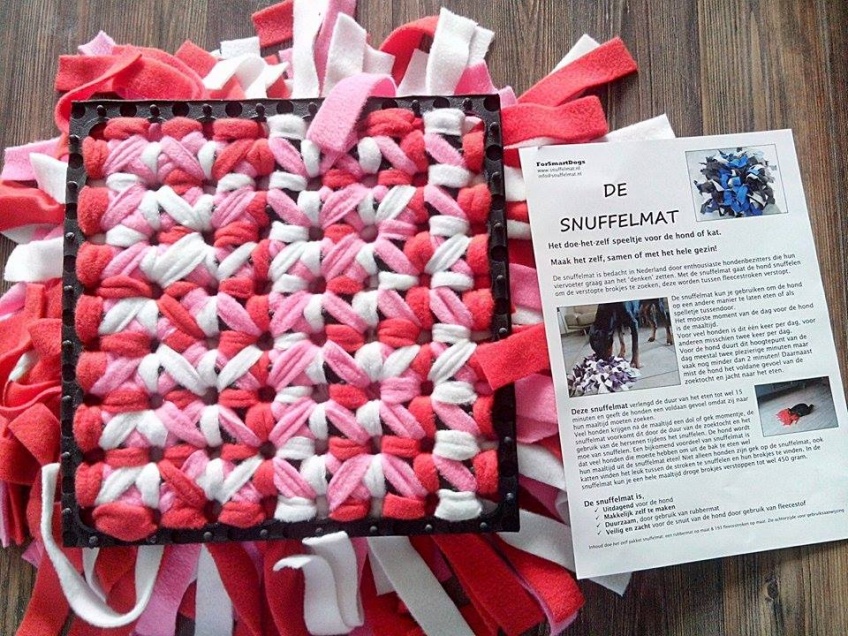 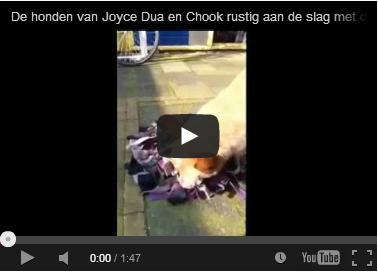 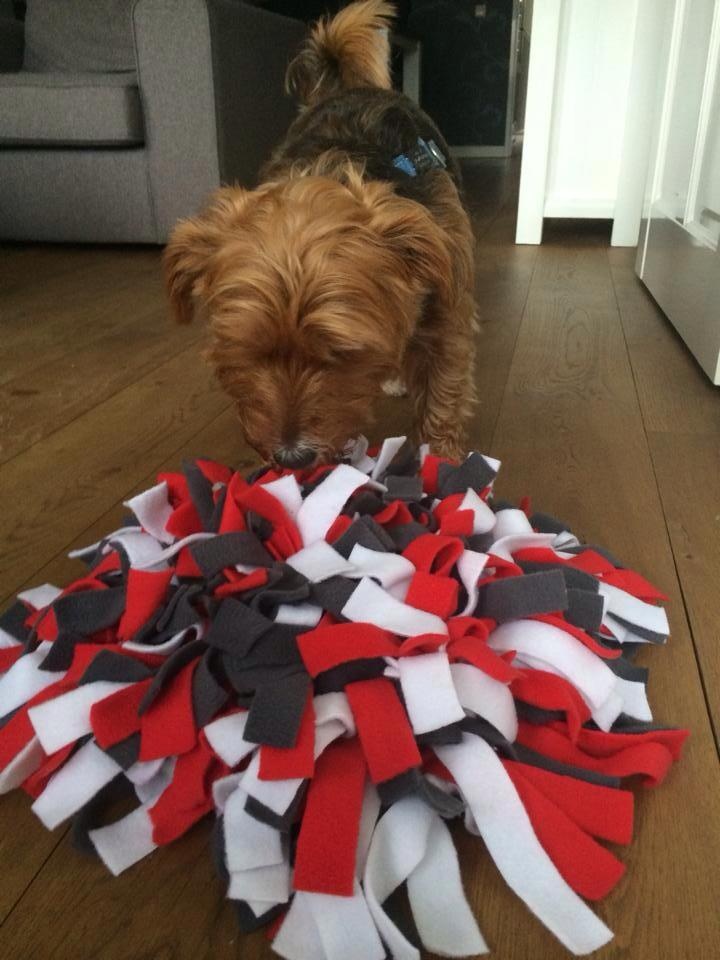 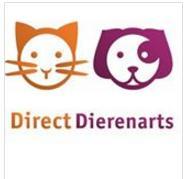